Michigan spending is already at recent highs without the kind of extra influx of cash that is being considered in Washington.

The governor’s proposed budget would spend $4.3 billion more than last year, a 7.0% increase. This includes $801.5 million more in money from state taxes and fees. State revenue has fully recovered from any losses that happened in the pandemic and is 2.0% above pre-pandemic levels when adjusted for inflation.

Given that Michigan is down one out of every 10 jobs over the past year, this number may seem a little surprising. The loss of jobs does not show up in state revenues, however. Income tax collections have been buttressed by federal relief efforts — unemployment insurance bonuses are subject to state taxation, for example. Sales tax revenue was stable, as people kept buying taxable goods online even when other stores were closed.

Lawmakers also have more money to spend this year due to reductions made last year. Administrators expected the pandemic to reduce tax revenues more than they did, so lawmakers budgeted for less. That they erred on the side of caution means that the governor’s budget has more money to spend today. 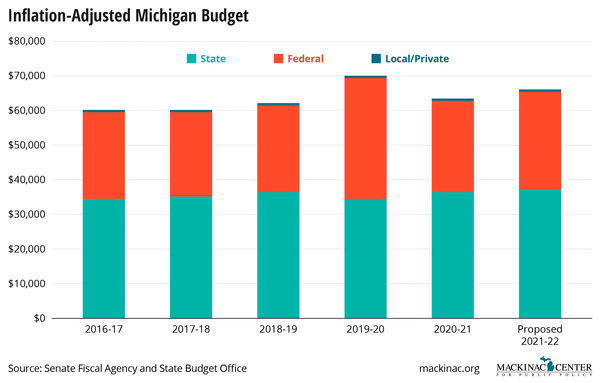 Even though state revenue showed surprising resiliency amid the state’s job losses, federal transfers to the state budget caused the budget to explode. Federal grants increased from $23.6 billion before COVID to $33.7 billion after, a $10.1 billion increase. Some of this is for targeted uses, like payments for virus testing, but other portions paid for general state spending, too.

As for Michigan, the governor’s proposal expects the state to receive a $4.8 billion increase in federal funding, compared to what it received before COVID-19. That’s down from 2020 (and its relief packages from Washington), but it does not include anything from President Joe Biden’s proposed stimulus. Democratic lawmakers want the federal government to bail out states for revenue losses. That’s impossible when there are no revenue losses.

Michigan is not alone in having stable revenue through the pandemic. According to the Census Bureau, state and local government tax revenue across the country increased in the first three quarters of 2020, the latest data released. Other data are also a good indication that state revenue held up far better than early pandemic expectations. If Congress wants to provide relief to the harms caused by COVID, then it should look elsewhere.

The state budget has done remarkably well through the pandemic and has been bolstered by the federal government already.

James M. Hohman
James M. Hohman is the director of fiscal policy at the Mackinac Center for Public Policy. He holds a degree in economics from Northwood University in Midland, Mich.

The lesson here — that Michigan residents shouldn’t be blamed or shamed for contracting a highly contagious illness — seems a difficult one to learn for some in government and the media.
Read more

The Democratically controlled congress and the Biden administration slipped a phase out of the popular refrigerant HFC, used in air conditioning and refrigeration systems, as well as in other items, into the recent COVID-19 relief bill.
Read more