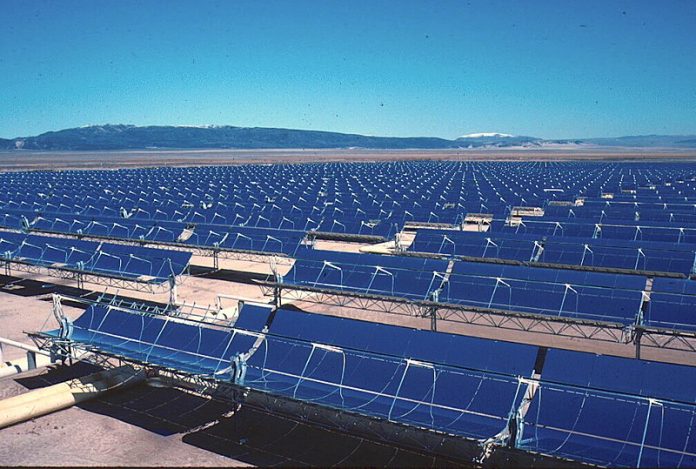 Underscoring its commitment to renewable energy in an effort to reduce greenhouse gas emissions, the administration of President Joe Biden fast-tracked the approval of a giant solar power project on federal land in the southern California desert on May 3.

The Crimson Solar Project (CSP) is scheduled to be developed on 2,000 acres of federal land approximately 13 miles west of Blythe, California.

The U.S. Department of the Interior (DOI) approved the $550 million solar facility. DOI estimates, when the project if fully operational, CSP will have the “potential” to power nearly 87,500 homes.

Recurrent Energy, a Canadian solar company, is developing CSP which will deliver power to Southern California Edison, for use throughout the utility’s service area. The DOI’s Record of Decision authorizes Sonoran West Solar Holdings, LLC, a wholly-owned subsidiary of Recurrent Energy, to construct the 350-megawatt (MW) solar photovoltaic facility, along with a 350-MW energy storage system for backup and supplementary power, and the necessary ancillary support systems on the federal land.

This is one policy among many the Biden administration is pursuing in order to fight climate change while creating jobs, said Deb Haaland, DOI secretary, in a press statement announcing the solar facility’s approval.

“Projects like this can help to make America a global leader in the clean energy economy through the acceleration of responsible renewable energy development on public lands,” Haaland said.  “The time for a clean energy future is now.

DOI fails to address the long-term environmental impacts of solar panels, which must be disposed of at the end of their operating lifespans, says physicist John Droz, director of the Alliance for Wise Energy Decisions.

“Solar panels are frequently discarded into landfills, where their toxic metals such as cadmium and lead can leech into the environment and potentially pollute groundwater,” said Droz. “It’s well documented that some solar panels will use PFAS, per- and polyfluoroalkyl,type chemicals, which the EPA and other regulatory agencies consider to be some of the most problematic toxic chemicals in the environment.

“Since the federal government does not restrict these in solar panels, and no state has yet done so, the burden of regulation falls on the shoulders of local communities – which are largely unqualified to do so,” Droz said. “One potential consequence is that these potentially toxic chemicals might get into local aquifers.”

As large and this project is it represents a drop in the bucket for what California needs to go all electric, says David Wojick, Ph.D., an independent energy industry analyst, who writes for the Committee for a Constructive Tomorrow (CFACT), which co-publishes Environment & Climate News.

“At 2000 acres, this is a pretty big solar slab, but it is tiny compared to what California alone, much less the country, would need to go solar,” said Wojick. “California peaks at around 42,000 MW, so they need 120 of these 350 MW slabs, covering a whopping 240,000 acres, but that is just for daytime use; they need at least that much again to charge the batteries for nighttime electric power needs, so add another 240,000 acres, making it 480,000 acres.

“But then California is moving to electrify all the cars and trucks and to end the use of natural gas for cooking, heating and other uses, doubling again the electricity needed, meaning the space taken up by solar arrays will top 960,000 acres,” Wojick said. “Throw on a little reserve and call it an even 1,000,000 acres, conservation, habitat, and wildlife will take big hits.”

Bonner R. Cohen, Ph.D., (bcohen@nationalcenter.org) is a senior fellow at the National Center for Public Policy Research and a senior policy analyst CFACT.

The July 13, 2021 article in Slate titled “Not Too Slick: How Exxon Mobil exposed itself on tape outlines a “sting” operation carried out by a Greenpeace...
Read more
Environment & Climate News

For the second time in the last six months, California regulators have failed to meet a deadline set by Gov. Gavin Newsom to issue well-siting regulations for oil and gas drilling sites in the state.
Read more