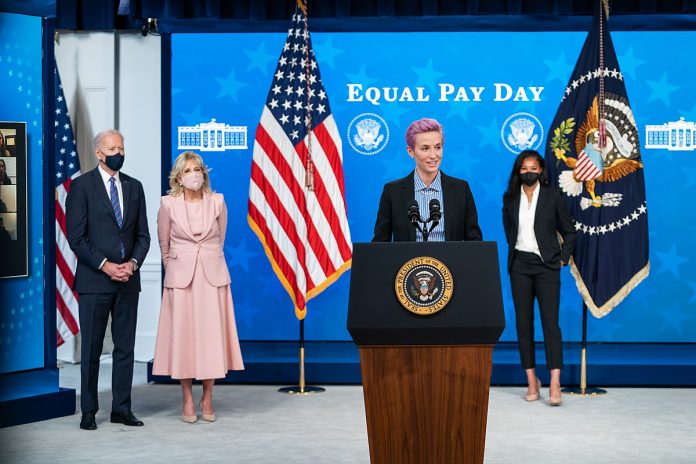 Never have so many won so many accolades for so few real achievements on the world stage. That about sums up the Olympics 2021—or, as I call them, the O-limp-ics 2021. Indeed, the time has come to retire the hallowed motto of the Games: “Faster, Higher, Stronger.”

Take Megan Rapinoe, please. The infamously pink-purple-haired captain of the U.S. women’s soccer team teared up after America’s 1-0 loss to Canada, which hadn’t beaten the U.S. since 2001. “This sucks,” she lamented in a post-defeat TV interview on USA Network. “It sucks.” With a runny nose and watery eyes leaking, she complained: “I don’t think I’ve ever lost to Canada, so it’s a bitter one.”

Well, she is certainly a bitter one, ain’t she? Perhaps if Moany Megan had spent more time running drills on the field instead of running her mouth about Black Lives Matter or gender politics or her hatred for former President Donald Trump, she’d be on the gold medal stand instead of out in the cold. Good riddance.

Then there’s Laurel Hubbard, the New Zealand weightlifter hailed not for her victories but for being the “first out transgender woman to compete in the 125-year history of the Olympics.” Hubbard’s first outing consisted of failing not once, not twice, but three times to lift at 120 kilograms and 125 kilograms. Never mind. She’s already “made Olympic history” and become an “inspiration” for “young people” to “be their authentic selves.”

Three failed lifts? Woo-hoo! Bucket list items checked off! Now, Hubbard says, “it’s probably time for me to start thinking about hanging up the boots.” Talk about resting on your, um, laurels.

Next up, Simone Biles: After bailing on her teammates last week and then withdrawing from the individual all-around competition as well as event finals in uneven bars, vault and floor, the acclaimed gymnast squeaked out a bronze on beam on Tuesday. She lost out to two Chinese athletes who don’t have the celebrity distractions of social media, Sports Illustrated photo shoots, and endorsement deals with Nike, Hershey’s, Kellogg’s, Visa, United Airlines, Uber Eats, Mattress Firm and Beats by Dre that Biles has racked up.

Who needs medals when you’ve got $5 million in glistening lucrative contracts hanging around your neck?

It’s getting more and more difficult not( to root against American Olympians who’ve turned the medal stand into their own personal grandstands. According to The New York Times, several militant athletes have been plotting for weeks to hijack the Games. U.S. shot-putter Raven Saunders, who won a silver, told the newspaper she raised her arms and crossed them in an “X” as a predetermined symbol to represent “unity with oppressed people” and “the intersection of where all people who are oppressed meet.”

Never mind her physical accomplishments. What really matters is that the 25-year-old is taking a stand for “people who are Black, L.G.B.T.Q. and those who have struggled with mental health as she has,” the Times reported. She said she wanted “to be me, to not apologize.”

What a sorry example of Olympic competition. You’ve got one job: win. If you can’t cut it, find a different calling, and share your troubles with a therapist, not the world. Sheesh.

The bad news is there will be five more days for Saunders’ fellow co-conspirators to woke-ify the world stage. Her compatriot and victim of oppression, American fencer Race Imboden, flashed “a black X with a circle around it on his hand during the medal ceremony for the foil competition on Sunday.” American hammer thrower and tantrum thrower Gwen Berry, who turned away from the flag in June during the Olympic trials, is still set to compete; so is an American sprinter named Noah Lyles, who “often wears a black glove and raises his fist on the track before his races,” according to the Times.

The O-limp-ics 2021 are proof-positive that spoiled American athletes top the planet in self-absorption, narcissism and entitlement. Take a bow.

School Reform News Heartland Author - May 26, 2022 0
Parental rights in education is not domestic terrorism. Any organization that says otherwise should have no influence over public policy whatsoever. And yet, in a first...

School Reform News Eileen Griffin - May 26, 2022 0
Three Richland, Washington school board members who voted to make masks optional are facing a recall petition after a court ruled the effort to...

Budget & Tax News Heartland Author - May 26, 2022 0
Sen. Ted Cruz is “bullish” about bitcoin. “When it comes to bitcoin and cryptocurrency generally, I am incredibly bullish,” the Texas Republican said, before adding that...