Exaggeration of weather events to sell climate crisis is not something new. In the case of a Sky News account of flooding in one Indian city, my own observations — backed up by independent data — are absolutely contrary to the news report.

Chennai — my home state’s capital, formerly known as Madras — is prone to floods, whose severity I’ve personally witnessed. In fact, the last time Chennai was flooded, I narrowly escaped by fleeing the city at the last hour. But, for me, that trauma does not make any more reasonable the media’s melodrama about climate’s role in floods.

The city is prone to yearly deluges from the strong Northeast Monsoon system during the months of October – January. This, coupled with poor planning and destruction of natural waterways, has led to an urban nightmare of flooding as a common event.

However, Sky News’ international Twitter report did not let the facts get in the way of its climate narrative. Standing in knee-high water, the reporter said, “We know that as a result of our warming planet, we are going to see more radical and frequent shifts in extreme weather – extreme heat to extreme rain.”

Except for a massive deluge in 2015, Chennai — located on India’s southeastern coast — has had a relatively steady amount of rainfall since 1969. For example, yearly rainfall variation (in the image below) shows that years of both intense and light rainfall have been common for the city. 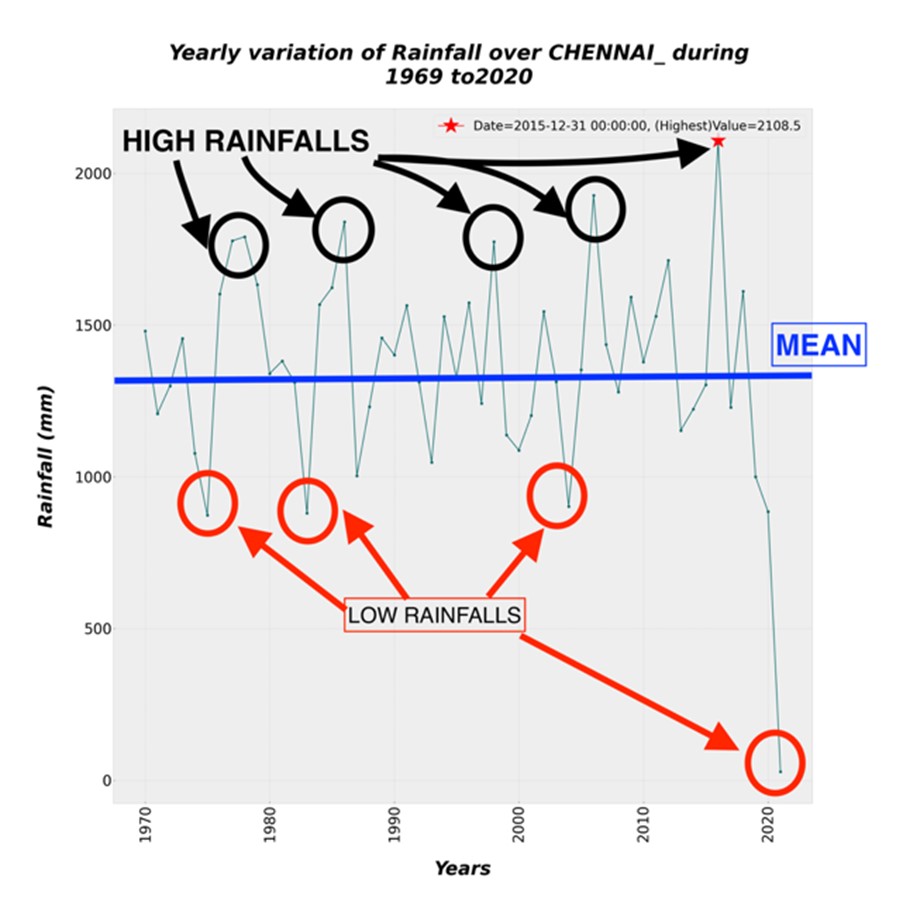 Monthly data for the city also show the sporadic nature of rainfall in the city with many high rainfall months since 1969. This means that intense downpours are not uncommon in the city.

Speaking to Hindustan Times, a meteorological expert said, “These extreme rains have happened several times in the past too. It is not due to any climatic change. The record for the highest rainfall in Chennai on a single day in November is still 1976.”

The main reason for the flooding is the unplanned expansion of the city, which resulted in the encroachment of natural reservoirs and the blocking of key natural drains for rainwater. This is a well-established fact backed up by satellite imagery.

A 2020 report from the Indian Government, titled Assessment of Climate Change over the Indian Region, laid out a comprehensive analysis of various factors affecting the climate in the country. According to the report, a medium-range analysis of cyclone frequency in the North Indian Ocean Basin revealed a decrease in frequency of severe cyclones between 1951 and 2018.

The data may be surprising to the reader because the mainstream media — like the Sky News journalist — regularly claim that extreme weather events increased in this period because of anthropogenic carbon dioxide emissions. But the reality is completely different.

In addition, there has been no significant warming in the city since 2004. In fact, satellite measurements captured a global pause in warming between 2000 and 2020, a trend like that observed in Chennai.

So, rainfall, cyclone landfall, and temperature have shown no dangerous increase in the city of Chennai. This case of interweaving the theory of climate crisis into a normal weather event by Sky News is typical of mainstream media. Either Sky News assumed its international viewers were unlikely to research the real reasons behind the flooding, or the news channel is ignorant of the facts itself.

We recommend applying a healthy dose of skepticism to assertions of climate-induced weather events. You also might want to follow more responsible outlets for your facts, such as the CO2 Coalition.

Vijay Jayaraj is a Research Associate at the CO2 Coalition, Arlington, Va., and holds a Master’s degree in environmental sciences from the University of East Anglia, England. He resides in Bengaluru, India.

This commentary was first published by the CO2 Coalition on November 16,2021 and is republished with permission.

Vijay Jayaraj
Vijay Jayaraj is a Research Associate at the CO2 Coalition, Arlington, Va., and holds a Master’s degree in environmental sciences from the University of East Anglia, England. He resides in Bengaluru, India.