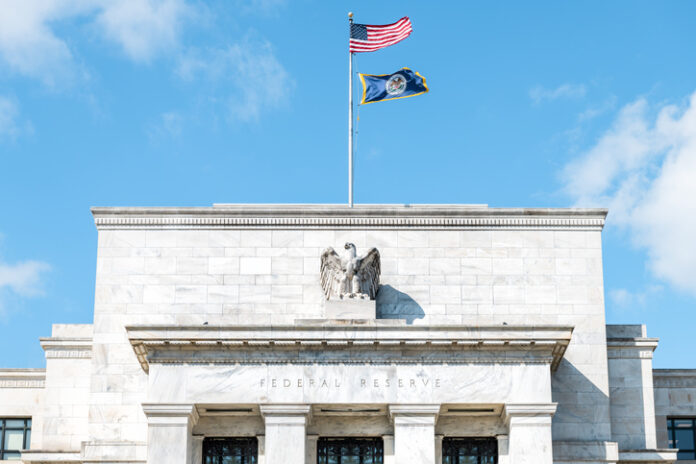 The Bureau of Labor Statistics is reporting 7.5 percent annualized inflation in the month of January, the highest reading since Feb. 1982, as recession warning lights continue to flash red, with the spread between 10-year and 2-year treasuries continuing to collapse to 0.47 percent as of this writing.

Coming on the heels of a 5.7 percent Gross Domestic Product growth in 2021, plus two consecutive strong jobs reports — nearly 1 million jobs have been created in the establishment survey in Dec. and Jan. 2022 combined — and at 4 percent unemployment, labor markets are at or near peak employment, all of which could point to an overheating economy.

Add to the mix the Federal Reserve’s intended interest rate hikes as soon as March as it continues to taper its purchases of U.S. treasuries. Already, since the Fed began tapering months ago, 2-year treasuries have experienced a major selloff, as indicated by rapidly rising interest rates.

If the yield curve inverts, it tends to predict recessions, having predicted almost every recession in modern history. Usually, a recession will occur on average 14 months after the inversion, with a range of 7 to 18 months. The exception to the rule is 1998, when there was a very brief inversion, but a recession did not intervene before it inverted again in 2000, predicting the 2001 recession. So, there are head fakes on recession indicators like the 10-year, 2-year, but they are not terribly common.

That is why to get a better sense of the economy, particularly with high inflation, it is important to consider how current conditions are impacting consumer spending. On that count, according to the Bureau of Labor Statistics, real earnings are down year over year by 1.3 percent: “From January 2021 to January 2022, real average hourly earnings decreased 1.3 percent, seasonally adjusted. The change in real average hourly earnings combined with a decrease of 1.5 percent in the average workweek resulted in a 2.7-percent decrease in real average weekly earnings over this period.”

In other words, just one year into the Biden administration, Americans are working less on average, paying more for consumer goods, and thus earning less. Are you better off than you were a year ago? Real earnings say no.

Certainly, as far as the Gross Domestic Product goes, one might expect a slowdown just based on the spending cuts by Congress. President Joe Biden’s $3.2 trillion Build Back Better plan has gone nowhere, meaning the increased levels of Covid spending are coming to an end. Today, on Feb. 10, Sen. Joe Manchin (D-W.Va.) reaffirmed his opposition to the legislation, stating it was “causing real and severe economic pain that can no longer be ignored,” adding, “It’s beyond time for the Federal Reserve to tackle this issue head on, and Congress and the Administration must proceed with caution before adding more fuel to an economy already on fire.”

That includes the $2.2 trillion CARES Act and $900 billion phase four legislation under former President Donald Trump, and the $1.9 trillion stimulus and $550 billion of new infrastructure spending under President Biden. As a result, the national debt has increased by $6.8 trillion to $30 trillion, of which the Fed monetized half, or $3.4 trillion, by increasing its share of U.S. treasuries to a record $5.7 trillion. Overall, the M2 money supply has increased by $6.3 trillion to $21.6 trillion, a whopping 29 percent increase. Almost every new dollar of debt was paid for by printing it.

What more is needed to explain the current bout of inflation?

But the increased spending is largely in the rear-view mirror. Now, in the 2022 calendar year, the Congressional Budget Office reports that federal government consumption expenditures will drop from $7 trillion in 2021 to $5.87 trillion in 2022, a 16.3 percent decrease, or about $285 billion per quarter.

And that is the story. The U.S. economy is coming off of wartime spending levels to do with Covid. Congress’ response under both former President Donald Trump and current President Biden was arguably the largest peacetime economic stimulus in history. The response did help to generate an immediate, short-term response in labor markets: By the end of 2020, more than 16 million of the 25 million jobs lost to Covid had been recovered. More than 6 million more would be recovered in 2021, too.

But the longer-term outcome of all that helicopter money was inflation, and as it turns out, a lot of it, which has now fueled the economy to the point of overheating. And then once the artificially high level of spending ends, the economy can slow down or even contract.

All of which is bad news for Biden and Democrats in the near-term, with just a 40 percent average approval rating and a whopping 54 percent disapproval rating according to RealClearPolitics, and the Congressional midterm elections that will come in November.  In midterm elections dating back to 1906 through 2018, the party that occupies the White House usually loses on average 31 seats in the House, and about three seats in the Senate. If that happens, Republicans will easily reclaim Congress this year.

The American people are rightly frustrated with an economy that sees prices rising faster than wages. The negative outcomes, both economic and political, are largely predictable the longer the inflation lasts. Buckle up.

Robert Romano is the Vice President of Public Policy at Americans for Limited Government Foundation. A version of this article appeared at algresearch.org. Originally published by the Daily Torch. Republished with permission.