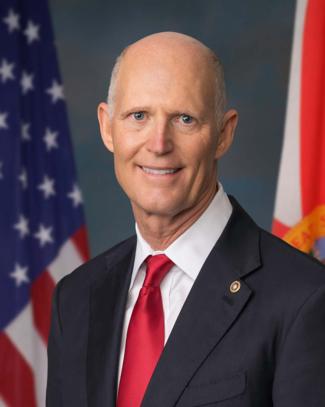 Scott denies that’s what he’s proposing, but some of his comments, including in The Wall Street Journal, aren’t as clear as they could be.

White House Press Secretary Jen Psaki certainly sees an opening. She tweets: “Senate Republicans have a plan to gut health care, raise premiums, and strip protections for pre-existing conditions. They also want to raise taxes on half of Americans, including seniors and working families. Don’t take my word for it, listen to @SenRickScott and @SenRonJohnson.”

On page 35 of the “11-Point Plan” it says: “All Americans should pay some income tax to have skin in the game, even if a small amount. Currently over half of Americans pay no income tax.”

A generous interpretation is that Scott is promoting a tax principle, not tax policy—and certainly not a tax proposal.

For years conservatives have argued that a flat income tax that was broad-based with a very low rate and virtually no deductions, except for a generous standard deduction, was the fairest type of tax.

But there would still be some who would pay no income tax because of the standard deduction.

However, over the years the tax code has become more and more progressive. The Tax Foundation says, “The top 50 percent of all taxpayers paid 97 percent of all individual income taxes, while the bottom 50 percent paid the remaining 3 percent.”

Some years ago, it became pretty clear that passing the initial vision of a flat tax, one that was very broad-based, would likely mean raising taxes for many of those with incomes in the bottom 50 percent. That was likely a non-starter, given the Republican brand.

Conservatives still support a flat tax, but with a very generous standard deduction that would exempt most of those in the bottom 50 percent of income from paying any income tax.

The 2017 Tax Cuts and Jobs Act took a few steps in that direction by lowering the tax rates on individuals (though it kept the same number of tax brackets), and removing many of the current deductions while raising the standard deduction.

But Republicans have to be careful how they talk about taxes. Democrats propose raising taxes all the time, but they will be the first to scream if it appears a Republican is doing so.

Originally published by  Institute for Policy Innovation. Republished with permission.