On Tuesday, President Joe Biden signed into law the Inflation Reduction Act (IRA), which among its Democratic-favored grab-bag of provisions included $80 billion in additional funding over the next 10 years for the Internal Revenue Service (IRS), a 53 percent increase over the agency’s projected budgetary baseline.

Because everyone pays taxes, and because the bill’s passage depended heavily on projections that a beefed-up IRS would locate and extract an additional $204 billion in currently unpaid revenue, many citizens became nervous about what the law would mean for them. To dampen the disquiet, the White House and Treasury Department in the run-up to the bill’s final passage made escalatory claims—untethered to any statutory language and in contradiction to projections by both the Congressional Budget Office (CBO) and the Joint Committee on Taxation (JCT)—that the historic enforcement increase would not increase the audit rates on American households earning less than $400,000 per year. Opposing Republicans, meanwhile, have been making frequently hyperbolic critiques about the IRA funding “87,000 new IRS agents” and so forth.

Faced with the choice of those two broad categories to scrutinize—the claims of the executive branch in justifying a major enforcement change with the potential to affect all adult residents of the United States, and the criticism thereof by losing Republican legislators—the fact-checking industry continues, even after the signing of the bill, to nitpick the ankle-biters instead of challenging Goliath.

All of these (and the many other similar) mainstream media fact-checking exercises have as their starting point not the contested promises made by the victorious White House and other key promoters of the IRA but soundbites from the types of conservatives that mainstream journalists find annoying. Consumers seeking to double-check the president were mostly stuck with such explicitly conservative outlets as Breitbart News.

This divide, and journalistic interest skewed more toward the excesses of rhetoric than the exercise of power, is reminiscent of the way professional fact-checking comported itself before, during, and immediately after Barack Obama’s signature Affordable Care Act. Back then, even though the then-president was routinely lying in easily discoverable ways about his health insurance overhaul, fact-checkers were obsessed with backbencher opposition to the point where PolitiFact awarded its “Lie of the Year” to Sarah Palin, who at the time held no elected office.

PolitiFact did belatedly catch up with the president’s fibs in 2013, at which point there was a moment of mild journalism-industry self-reflection. Though, as I warned at the time, the mea culpas did not contain nearly enough self-awareness about how Democratic politicians and operatives, coming as they do from largely the same class of people as national journalists, have been consciously and successfully working the refs.

So it has been this week. It’s not just that the fact-checkers have been trawling for conservative B.S.—which, when identified accurately, is always legitimate to call out. It’s that they’re holding up as debunkatory evidence assertions by the White House that either have no statutory force or are themselves misleading, even false.

For instance, FactCheck.org’s piece claims right at the outset that “most new hires” by the IRS “will provide customer services,” then expands on the point further down:

“The majority of hires made with these resources fill positions of the 50,000 IRS employees who are on the verge of retirement. Of the net new hires, the majority are hired to improve customer services – from upgrading IT to answering phone calls,” the Treasury Department spokesperson said.

This is not checking a fact, this is reproducing speculative spin that makes no sense when you look at where the additional IRS spending has been statutorily allocated. 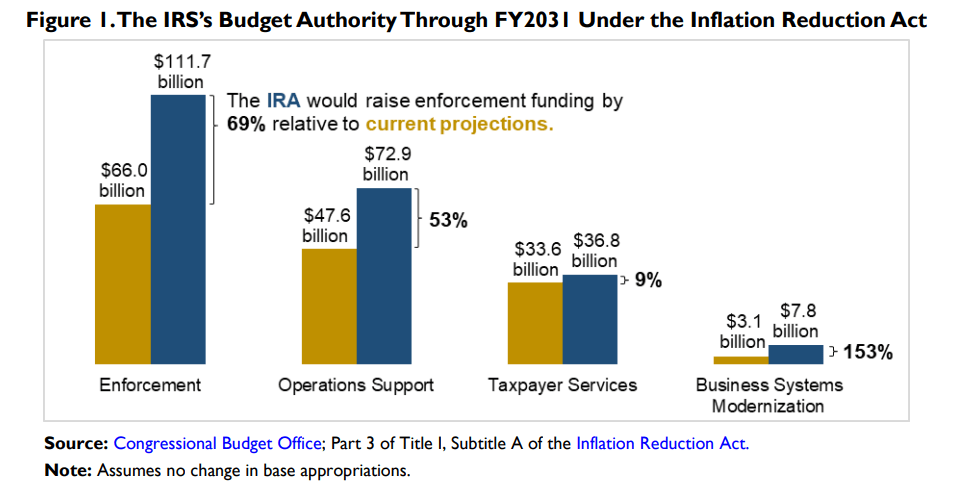 The Treasury Department spokesperson would have us believe that 50.01 percent of newly created positions funded by this $80 billion injection will work in the divisions receiving just 10 percent of the money. That is just not credible, let alone a credible basis for debunking someone else’s fact.

Other administration assertions taken as baseline fact by many fact-checkers include that 52,000 IRS employees—nearly two-thirds of the agency’s total work force—will retire in just the next five years; and that the “tax gap,” or amount of annual unpaid taxes owed, is “at least $381 billion” (Snopes), or $585 billion (PolitiFact), or $600 billion (Reuters).

“The speed and voracity with which [Republicans] are coming at this is really a testament to how important these resources are going to be,” Sarin added, “because there are many wealthy tax evaders that stand to lose a lot.” As a furtherance in the checking of a fact, this quote provides zero—perhaps even negative—value. It does, however, provide useful color commentary in the service of clowning conservatives.

Many Americans do not enjoy being reminded of the fact that a country that began as a tax revolt against England now has a federal agency with some 81,600 employees dedicated to confiscating the maximum amount of income from its citizens allowable by (very confusing) law, under threat of potential imprisonment. The Inflation Reduction Act, in greatly expanding that power—a full 69 percent of the funding increase is dedicated unambiguously to “enforcement”—has surfaced that unpleasant reality in a way that could be politically potent.

It is understandable, if unseemly, that an executive branch funded by those very same tax dollars would be busy minimizing every hard-to-swallow detail of its historic IRS expansion. The Democrats who lead the government have to run for reelection, after all. Journalists have no such excuse, though they may soon learn that fact-checks showing there are “only” 2,100 IRS agents who carry firearms are not as reassuring to readers as they are to reporters.

Matt Welch
Matt Welch is an editor at large at Reason.