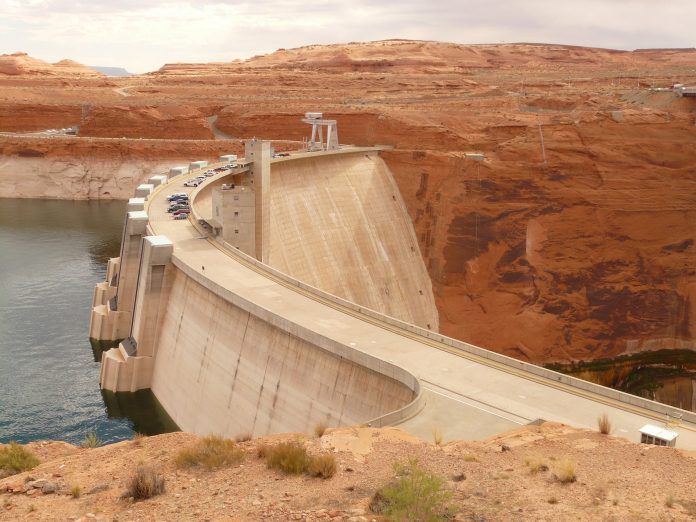 (The Center Square) – Arizona and Nevada will see less water from the Colorado River under new plans released Tuesday by the federal federal government because of ongoing and severe drought.

The U.S. Department of Interior said water releases from Glen Canyon Dam in Arizona and Hoover Dam at the Arizona-Nevada border would be decreased following projections from a two-year study.

“In the Lower Basin, the reductions represent the second year of additional shortage declarations, demonstrating the severity of the drought and critically low reservoir conditions,” the Interior Department and the Bureau of Reclamation said in a news release.

“The Interior Department is employing prompt and responsive actions and investments to ensure the entire Colorado River Basin can function and support all who rely on it,” Tanya Trujillo, assistant secretary for water and science at the department, said in a statement. “We are grateful for the hardworking public servants who have dedicated their lives to this work, and who are passionate about the long-term sustainability of Basin states, Tribes, and communities.”

The federal government’s plan comes after western states could not come to an agreement by the August 15 deadline for a plan that would conserve an additional 2-4 million acre-feet (MAF) of water.

The Colorado River spans almost 1,500 miles from its headwaters in the Rocky Mountains to Mexico’s Gulf of California, though river water rarely makes it to the gulf. The basin includes seven U.S. states and supplies water to around 40 million people.

The Upper Colorado River Commission last month sent a “5 Point Plan” to the bureau outlining how they will “proactively support critical infrastructure and resources” with the lower basin states.

“Reclamation data shows that Lower Basin and Mexico depletions are more than double the depletions in the Upper Basin,” the commission said in a letter to the bureau. “Therefore, additional efforts to protect critical reservoir elevations must include significant actions focused downstream of Lake Powell. Otherwise, the effectiveness of our 5 Point Plan will be limited.”

“It is unacceptable for Arizona to continue to carry a disproportionate burden of reductions for the benefit of others who have not contributed,” Arizona Department of Water Resources Director Tom Buschatzke and Central Arizona Project General Manager Ted Cooke said in a statement. “Arizona is committed to work toward a comprehensive plan that assures protection of the system through equitable contributions from all water users.”

The federal government is pumping significant funding into water conservation efforts in western states. The Inflation Reduction Act, which President Joe Biden signed into law on Tuesday, will allocate $4 billion to efforts in the Colorado River Basin. The Bipartisan Infrastructure Law also allocated $8.3 billion to the bureau for water programs.

This story is developing and may be updated.

Derek Draplin is a regional editor at The Center Square. He previously worked as an opinion producer at Forbes, as an editor at The Daily Caller, and as a reporter at Michigan Capitol Confidential and The Detroit News.

Derek Draplin
Derek Draplin is a regional editor at The Center Square. He previously worked as an opinion producer at Forbes, as an editor at The Daily Caller, and as a reporter at Michigan Capitol Confidential and The Detroit News.