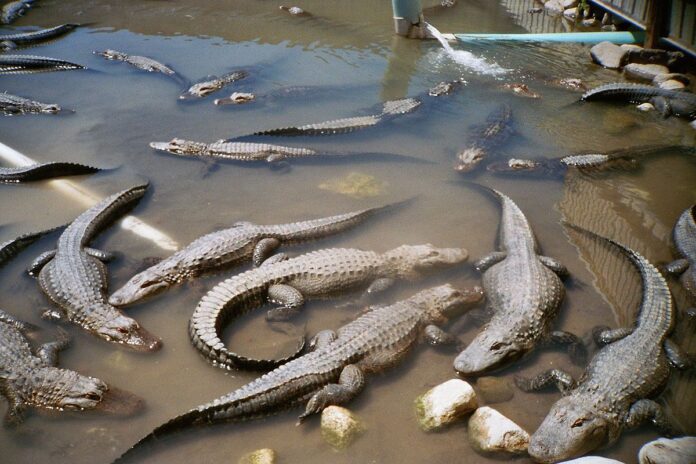 The Federal court for the Eastern District of California, based in Sacramento, has temporarily blocked a California law that would ban the sale of alligator products in the state.

Since the early 1970s, California has had a law banning commerce in alligator and crocodile products, but it has repeatedly issued exceptions allowing such sales. The most recent exemption expired on December 31, 2019, and at the behest of animal rights groups, California’s legislature declined to renew it.

California enacted its ban on alligator imports and sales a few years after the federal government placed the species on the endangered species list in 1967, even before the government passed the ESA in 1973 and prohibited alligator hunting.

Alligator farmers release 10 percent of their farm-raised alligators into the wild and are parties to strictly-regulated contracts with landowners to collect their eggs. These contracts further bolster conservation efforts by incentivizing the protection the Louisiana’s wetlands to ensure the long-term health and sustainability of alligator populations.

Currently, the Louisiana alligator population stands at more than two million wild gators and another 900,000 on alligator farms.

Even before alligators were removed from the endangered species list in 1987, in the 1979 Fouke ruling a federal court overturned the California ban, saying the law was preempted by federal law and hampered recovery efforts. Instead of repealing the law, California’s legislature placed a moratorium on its enforcement, which they renewed periodically. The moratorium lapsed on December 31, 2019.

Judge Kimberley Mueller, chief judge of California’s Eastern District court, who was appointed by then-President Barack Obama, issued a temporary restraining order on the enforcement of California’s alligator ban on December 23, 2019, which had been scheduled to run until an April 24 hearing to determine whether the multiple lawsuits should be consolidated into a single case and whether the plaintiffs were likely to succeed on the merits.

With court closures during the initial response to the COVID-19 pandemic, the hearing was delayed and the stay extended. The court heard oral arguments concerning California’s law in June and Mueller issued an injunction halting enforcement of the law on October 13.

“California’s law is in direct conflict with Federal Law and court precedent,” argued Landry. “The court found that the alligator ban is preempted by the Endangered Species Act, and the Fouke injunction is still in force.

“Recognizing its legal defects, California repealed the alligator ban in 2006, but only through December 31, 2019,” Landry said.

Harvests and hide sales of American alligators are highly regulated, and because the California market is significant, allowing it to ban the sale of alligator products could harm ongoing conservation efforts, said Dilys Roe, principal researcher at the International Institute for Environment and Development, in a sworn statement presented on behalf of the International Union for the Conservation of Nature.

“The crocodile industry is now worth over 100 million dollars a year, the illegal trade has all but vanished, and crocodiles are far more abundant than they were 50 years ago,” Roe said. “Enforcement [of California’s ban] would do ‘profound and immediate’ harm to crocodile populations and ‘thousands of poor people who rely on income earned from collecting eggs for crocodile farming,’” Roe told the court according to the Mercury News.

Although Mueller wrote the plaintiffs arguments that alligator populations and the alligator industry would harmed if California’s law was allowed to take effect were compelling, she said her injunction was issued on the basis of the law, not policy.

“In determining whether to issue a preliminary injunction, courts must consider whether the moving party (1) ‘is likely to succeed on the merits,’ (2), is ‘likely to suffer irreparable harm in the absence of preliminary relief,’ (3) ‘the balance of equities tips in [its] favor, and’ (4) ‘an injunction is in the public interest,’” wrote Mueller in her decision issuing the injunction. “It appears there would be no way to remedy after the fact the harms plaintiff would suffered without an injunction. Thus, plaintiffs have shown they are likely to suffer an irreparable injury.

“Defendants [California] on the other hand argue California’s ban on trade in these species would be more effective in protecting the welfare of these animals,” Muller’s ruling continues. “For a district court to answer the question of which system would better serve the public interest risks crossing the line from law into policy. Here, setting aside the policy judgments this dispute encompasses, the court concludes plaintiffs’ likelihood of success as to preemption compels finding in favor of plaintiffs. The question is not which policy better protects animals, but whether state or federal law controls.”

Mueller’s injunction is temporary, placing enforcement of California’s law on hold throughout the trial concerning the substantive legal and policy questions being contested in the case, and any subsequent appeals that may be filed.

Mueller’s ruling demonstrates she understands the harm California’s ban could have on alligator conservation and the alligator industry, said David E. Frulla, an attorney representing some of the retail companies suing to block California’s law, in phone interviews with the Associated Press and Courthouse News Service.

“I think we very much appreciate that the judge recognized the economic concerns involved and also that there is a sustainability regime built into trade for alligators and crocodiles,” Frulla said.

This ruling gives the alligator industry hope it will continue to keep operating, said Bill Hogan, chair of the Louisiana Wildlife and Fisheries Commission, said in statement delivered to the press through email.

“We are encouraged by the court’s decision,” Hogan said. “We know this is the first step and not the last.

“But it gives Louisiana’s vital alligator industry the ability to continue operating in California and beyond,” Hogan said.

H. Sterling Burnett, Ph.D. (hsburnett@heartland.org) is a senior fellow at The Heartland Institute.