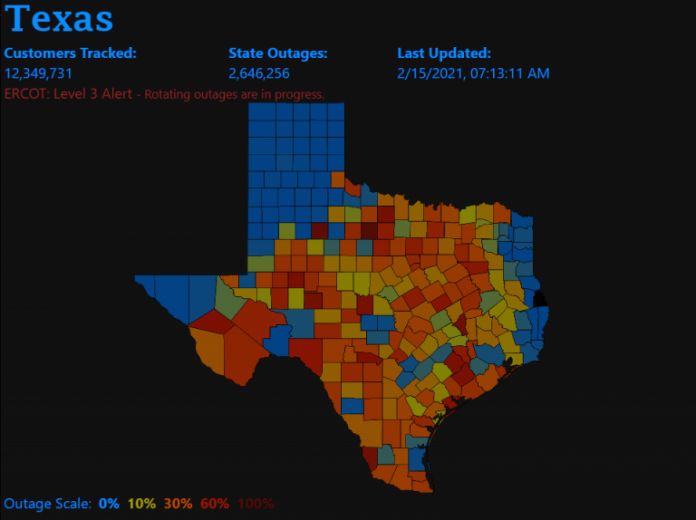 As reported this morning on Climate Realism, ice storms knocked out nearly half the wind-power generating capacity of Texas on Sunday as a massive deep freeze across the state locked up wind turbine towers, creating an electricity generation crisis.

Wind generation ranks as the second-largest source of energy in Texas, accounting for 23% of state power supplies last year, behind natural gas, which represented 45%, according to the Electric Reliability Council of Texas (ERCOT) figures.

At the same time the freezing temperatures were driving electricity demand to record levels, ERCOT was calling on consumers and businesses to reduce their electricity use as much as possible Sunday, Feb. 14 through Tuesday, Feb. 16.

“We are experiencing record-breaking electric demand due to the extreme cold temperatures that have gripped Texas,” said ERCOT President and CEO Bill Magness. “At the same time, we are dealing with higher-than-normal generation outages due to frozen wind turbines and limited natural gas supplies available to generating units. We are asking Texans to take some simple, safe steps to lower their energy use during this time.”

ERCOT reports today the spot price for electricity in Texas is currently a stunning $9000 per MegaWatt-hour. Even in the high demand summer months, $100 per MW-hr would be high.

Meanwhile, a graphic provided by ERCOT shows the huge gap between electricity supply and demand today: 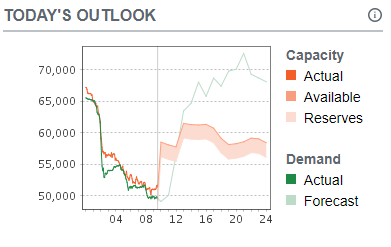 Capacity is expected to fall short of demand by as much as 20,000 megawatts today, while the National Weather Service in Dallas predicts record low temperatures between -6° F to 3° F for Monday night.

A map from poweroutage.us is showing the scope of power outages in Texas shows that about 75% of the state is experiencing power outages in varying percentages with a significant portion having no power at all. 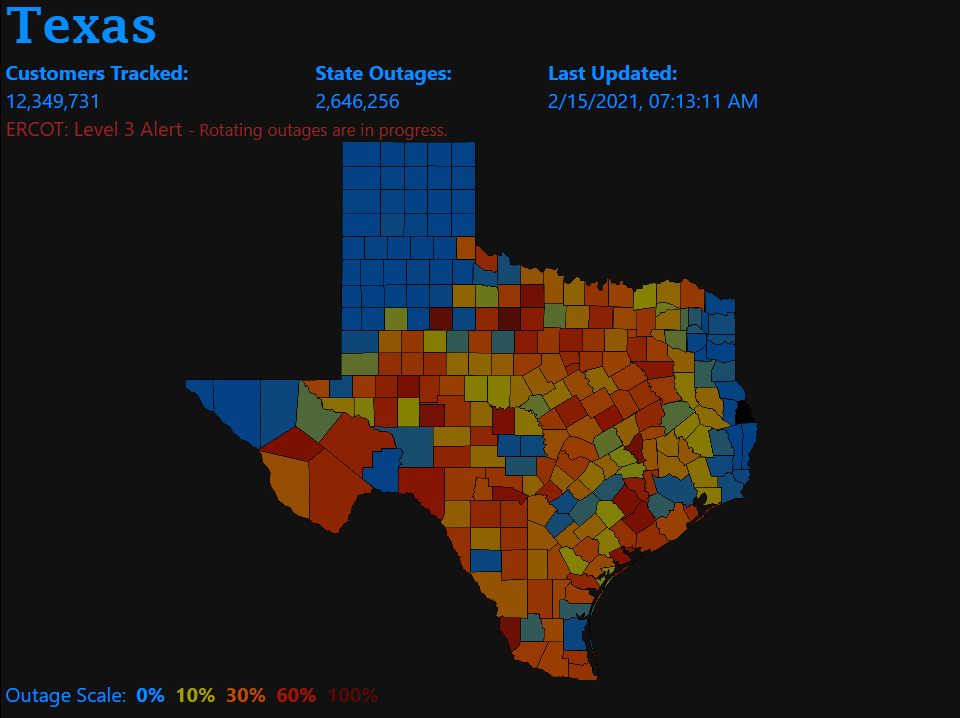 At the moment, ERCOT is placing rolling power outages in effect to prevent a complete collapse of the power grid saying:

“ERCOT has issued an EEA level 3 because electric demand is very high right now, and supplies can’t keep up. Reserves have dropped below 1,000 MW and are not expected to recover within 30 minutes; as a result, ERCOT has ordered transmission companies to reduce demand on the system.

This is typically done through rotating outages, which are controlled, temporary interruptions of electric service. This type of demand reduction is only used as a last resort to preserve the reliability of the electric system as a whole.”

It is sad and ironic that in a state known for its huge petroleum and natural gas resources, wind power’s lack of reliability has brought the state to its knees in a time of crisis. This is not unlike what California experienced in 2020 during record heat where wind and solar power could not keep up with demand and there was near collapse of the grid.

The folly of chasing renewable energy as a means of mitigating “climate change” is making itself abundantly clear today in Texas. When will politicians wake up and realize that renewable energy almost always results in unreliable energy?

Perhaps when Texas electricity customers get their sky-high electric bill for what little electricity they’ve been allowed to have, they’ll push for change.