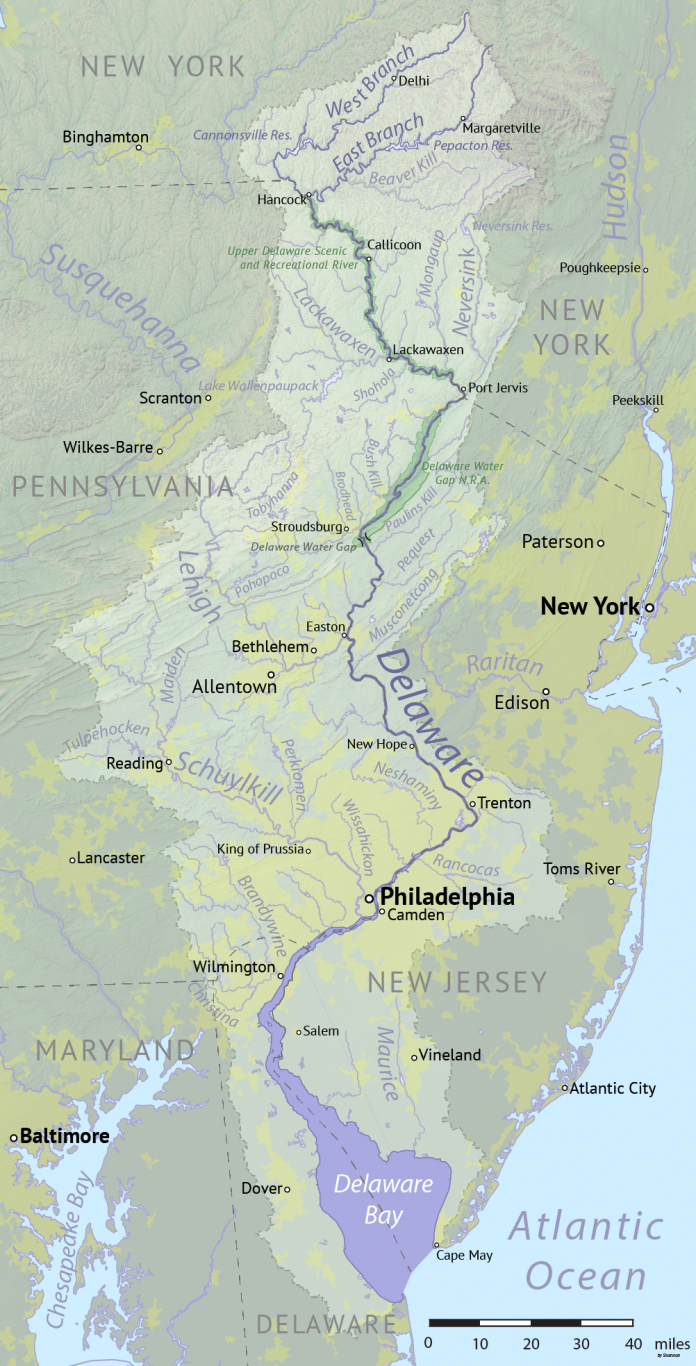 The Delaware River Basin Commission (DRBC) voted to ban natural gas drilling within the Delaware river watershed. Their February 25 action made permanent what had been a de facto moratorium on oil and gas production within the river basin, which had been contested for 10 years.

Property owners and natural gas companies have been fighting the moratorium in court for those ten years. In January, some Republican state legislators from Pennsylvania joined the fight to end the moratorium.

The multi-state DRBC regulates water quality and manages permits for industrial activity in the basin that could possibly impact the river and its tributaries. The commission is composed of the governors of each state in the DRBC, and the commander of the U.S. Army Corps of Engineers’ North Atlantic Division, representing the federal government.

The Democratic governors of Delaware, New Jersey, New York, and Pennsylvania, John Carney, Phil Murphy, Andrew Cuomo, and Tom Wolf, respectively, have each publicly supported either banning fracking entirely, or banning it in the Delaware River Basin long before the vote, so the vote came as no surprise.

Speaking on behalf of the Biden administration, Brigadier Gen. Tom Tickner of the Army Corps of Engineers said the new administration had insufficient time to review the proposal, which had been in the works before Biden took office, and so abstained from voting.

“Due to the recent Administration transition, this coordination has not been completed, and we thus abstained from today’s vote,” Tickner said in statement. “We respect the vote from each of the Commissioners representing their respective states.”

The vote prohibits gas drilling in northeastern Pennsylvania, a state which allows and benefits from fracking, and southern New York state, where fracking has been banned since 2014.

Gas companies, property owners, and group of Republican state legislators from Pennsylvania, have filed a lawsuit to overturn the ban, saying the decision exceeds DRBC’s authority.

The ban violates property owners rights, will result in higher energy costs, and shows Biden was not being truthful when he said he would not ban fracking, said David Callahan, president of the Marcellus Shale Coalition (MSC), in a press release.

“It may be a good day for those who seek higher energy prices for American consumers and a deeper dependence on foreign nations to fuel our economy, but this vote defies common sense, sound science, and is a grave blow to constitutionally protected private property rights,” Callahan said. “The ruling, which ‘prohibits high volume hydraulic fracturing’ in the Basin is not only a politically-charged overreach of the Commission’s authority, but it also threatens job and economic growth, energy security, and robs landowners and rural Wayne and Pike Counties of their constitutional right to realize upwards of $40 billion worth of natural gas – which would also generate critical tax revenue to the state.

“‘I will not ban fracking. Period.’ President Biden exclaimed at a rally in Luzerne County, which neighbors his home city of Scranton, last October,” Callahan continued. “Yet the moment his administration had a chance to standup for the hardworking voters of this key battleground state, the administration failed to deliver.”

The ban was driven by politics not science, Gene Barr, chief executive of the Pennsylvania Chamber of Business and Industry, told the Associated Press.

“There is no support to any claim that drilling results in widespread impacts to drinking water, rivers or groundwater,” said Barr. “This was a political decision uninformed by science.”

Republican State Sens. Gene Yaw and Lisa Baker filed a federal lawsuit to overturn the ban. Their brief argues the DRBC lacks the authority to regulate gas drilling in Pennsylvania, because it is a power reserved exclusively to the legislature.