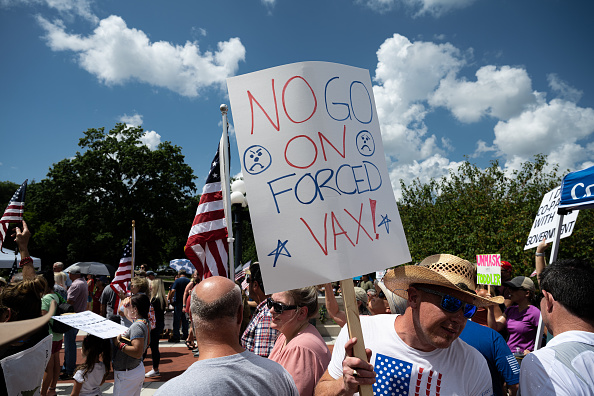 New polling shows that the majority of Americans do not approve of President Joe Biden’s new vaccine mandate.

Biden announced the mandate last week, which includes requirements that any business with more than 100 employees ensure they are vaccinated or be tested weekly. Biden’s announcement included a range of other federal rules that are estimated to affect 100 million Americans.

Convention of States Action released new polling Monday that showed 58.6% of those surveyed “do not believe President Biden has the constitutional authority to force private businesses to require vaccine mandates for employees.”

In the same poll, 29.7% of voters said Biden does have the authority, and 11.7% are unsure. In addition, 55.5% of voters say the mandate “sets a precedent that could be abused by future presidents on other issues.”

A new surge of Republican governors, 27 so far, have announced their opposition to Biden’s mandate. Several lawsuits are reportedly in the works among Republicans.

Florida Gov. Ron DeSantis, who has been a leading critic of the Biden administration’s COVID-19 requirements, said the president overstepped his constitutional authority.

“When you have a president like Biden issuing unconstitutional edicts against the American people, we have a responsibility to stand up for the Constitution and to fight back, and we are doing that in the state of Florida,” DeSantis said. “This is a president who has acknowledged in the past he does not have the authority to force this on anybody, and this order would result potentially in millions of Americans losing their jobs.”

According to the poll, those governors have Americans’ support. The survey found 56.1% of voters “support the efforts of state governors to oppose Biden’s nationwide vaccine mandate on private businesses.” That includes 46.3% who “strongly support,” and 9.8% who “support.”

Opinions on the mandate fall largely along party lines. Nearly 80% of Republicans support the governors standing up to Biden while about 30% of Democrats feel the same way.

This poll comes on the heels of another poll released last week that showed a sharp drop in approval for Biden after the deadly withdrawal of U.S. troops from Afghanistan.

The Economist/YouGov poll reported last week that Biden’s approval fell to an all-time low of his presidency, with 39% of Americans approving of his job performance and 49% disapproving.

Convention of States Action partnered with The Trafalgar Group to release Monday’s poll, which surveyed more than 1,000 likely voters from Sept. 10-12.

Previously published at The Center Square. Republished with permission.

Casey Harper
Casey Harper is a Senior Reporter for the Washington, D.C. Bureau of The Center Square. He previously worked for The Daily Caller, The Hill, and Sinclair Broadcast Group. A graduate of Hillsdale College, Casey's work has also appeared in Fox News, Fox Business, and USA Today.

Buchanan: Biden Commits US to War for Taiwan