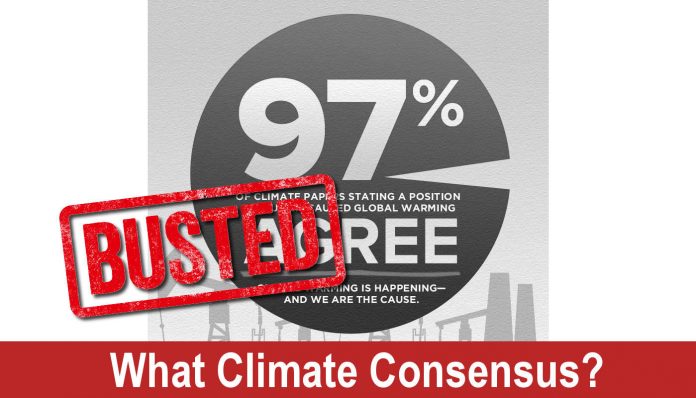 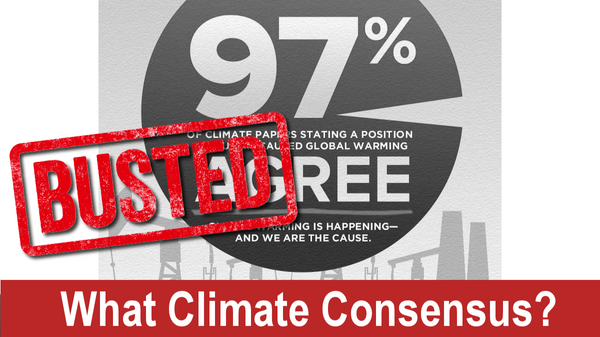 The Heartland Institute recently commissioned a survey by Fairleigh Dickinson University to get scientists’ thoughts on climate change. The survey results dispel the notion that 97 percent of relevant scientists believe humans are causing catastrophic climate change. Instead, Heartland’s poll found the percentage of earth scientists who believe anthropogenic climate change will “significantly harm” people’s standard of living in our lifetimes is far lower than previously reported: 59 percent.

Fairleigh Dickinson surveyed 400 people who hold at least a bachelor’s degree in the academic fields most pertinent to the climate debate, including meteorology, climatology, physics, geology, and hydrology. Ninety-five percent of the respondents fell into the categories of meteorology (72 percent) or climatology (23 percent), so physicists and geologists, among others, were underrepresented, in my opinion. Only 24 percent of those surveyed had advanced degrees in their respective fields, and only 6 percent had Ph.Ds.

It is unfortunate that the sample size wasn’t larger and the poll didn’t survey more people with advanced degrees who are conducting and publishing research on climate change. I also wish more physicists and geologists had been surveyed. Oh, well; as with every other poll, you can only survey those who agree to be interviewed.

Unsurprisingly, the poll found 96 percent of those surveyed believe climate change is occurring, and on average they attribute 75 percent of the change to human activity. Beyond those two points, there is nothing approaching a consensus among the scientists.

As my Heartland colleague Chris Talgo wrote in an article for Townhall discussing the survey, “even among the 59 percent of scientists who expect significant harm at some point in our lifetimes, the term ‘significant harm’ is a far cry from the term ‘crisis’ that is often employed by climate activists and the media.”

Forty percent of those surveyed were either unsure whether any harm would occur, thought climate change might cause slight harm, or believed climate change would result in a slight or significant improvement in the lives of people living today. The remaining respondents said they do not believe climate change is occurring.

More than four-fifths of those surveyed said extreme weather events such as hurricanes, droughts, and wildfires have increased significantly (41 percent) or slightly (46 percent) in recent years. This shows, however, not that extreme weather has in fact worsened, but that the perception of many scientists has been skewed by media coverage, anecdotal claims, and the influence of their colleagues—sources vastly different from hard data, peer-reviewed research, and Intergovernmental Panel on Climate Change reports. I say this because the available data show just the opposite.

[O]fficial data from the United States government and international sources show the frequency of hurricanes has slightly declined in recent years, and they have not become more severe. Data also shows wildfires have decreased over the past century. Instances of extreme drought and tornadoes also remained unchanged or slightly declined.

And concerning harm to humans, peer-reviewed studies like one recently published in The Lancet show human deaths related to temperatures have declined significantly over the past 30 years, and human mortality related to climate has declined during the last hundred years of climate change.

What this poll confirms is that in thinking about extreme weather events, scientists often don’t follow the scientific method or the established rules for scientific forecasting as laid out by Kesten Green and J. Scott Armstrong in their series of papers, studies, and presentations on the subject. Green and Armstrong write,

… dire predictions are not, however, the result of scientific forecasting; rather, they are the opinions of experts. Expert opinion on climate change has often been wrong. … Climate scientists now use computer models, but there is no evidence that modeling improves the accuracy of predictions. For example, according to the models, the Earth should be warmer than actual measurements show it to be.

Commenting on this point in a press release, Heartland Institute President James Taylor said, “the Scientific Method requires that we engage in science by testing and analyzing theories according to objective data rather than asking for a show of hands.”

Another interesting finding of the study is the generational and experiential divide it reveals.

Heartland Senior Fellow Anthony Watts and I find it instructive that only a minority of the older, more-experienced scientists surveyed, ages 50 and above, said climate change presents a serious danger. Of those surveyed, it seems more-seasoned professionals have more-moderate opinions on the effects of climate change: their responses were more consistent with existing data, in contrast to the more-extreme, alarmist views of younger respondents.

My conclusion about this observation is that the more experience one has as a researcher, the more skeptical one becomes of extreme claims. The evidence suggests years of indoctrination have succeeded in programming younger, less-experienced climate scientists into believing humans are causing a climate catastrophe even though the data say otherwise.

So, do the survey participants believe the climate is changing? Yes. (And they should, as it is always changing.) Are humans responsible for most of it? Those polled say yes. Is this causing a catastrophe? No agreement.

Podcast of the Week

There’s been a sharp uptick in protests in the name of a climate change induced catastrophe across the globe. Fridays for Future, the group inspired by Greta Thunberg, recently held protests in 450 locations. Stories are flooding the news of protestors gluing themselves to private property and then expecting the businesses to cooperate with their demands. Why the sharp uptick in protests? Are these grassroots protests or is this a political scheme?

Subscribe to the Environment & Climate News podcast on Apple Podcasts, iHeart, Spotify or wherever you get your podcasts. And be sure to leave a positive review!

Get your Copy at Amazon TODAY!

Climate Crisis Ain’t What it Used to Be 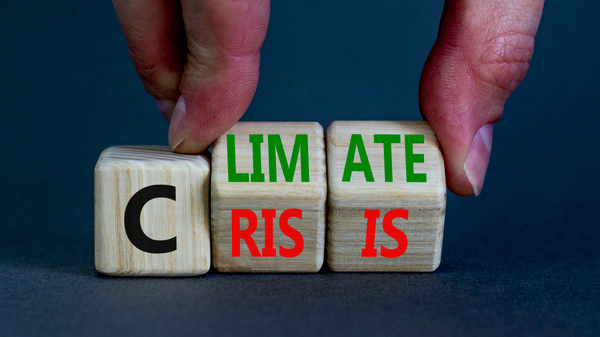 Growing realization by the climate establishment that the threat of future warming has been cut in half over the past 5 years.

Summary: The climate “catastrophe” isn’t what it used to be. Circa 2013 with publication of the IPCC AR5 Report, RCP8.5 was regarded as the business-as-usual emissions scenario, with expected warming of 4 to 5 ℃ by 2100. Now there is growing acceptance that RCP8.5 is implausible, and RCP4.5 is arguably the current business-as-usual emissions scenario. Only a few years ago, an emissions trajectory that followed RCP4.5 with 2 to 3 ℃ warming was regarded as climate policy success. …

The mainstream media is currently awash with articles from prominent journalists on how the global warming threat [is] less than we thought. Here are some prominent articles:

David Wallace-Wells is one of the most interesting journalists writing in the climate space. In 2017, he wrote a New York Magazine article titled “The Uninhabitable Earth”, with subtitle: “Famine, economic collapse, a sun that cooks us: What climate change could wreak—sooner than you think.” Not long after publication of his book in 2019 entitled The Uninhabitable Earth, David Wallace-Wells made this statement: “Anyone, including me, who has built their understanding on what level of warming is likely this century on that RCP8.5 scenario should probably revise that understanding in a less alarmist direction.”

Unfortunately, even as alarmists are being forced in part by a better understanding of climate sensitivity to abandon the most-extreme temperature scenario, they irresponsibly claim the harm from warming will be worse than alarmists had previously claimed, Curry notes. Curry responds:

[T]he IPCC AR6 provides very meager fodder to support [claims that scientists have underestimated the impact of warming]. Apart from sea level rise, which is unambiguously associated with global warming, there is no prima facie reason that extreme weather events would worsen in a warming climate. Observational evidence, provided that you go back at least to 1900, shows that nearly all horrible, recent weather and climate disasters have precedents in the 20th century and hence “detection” is very challenging. Climate models are not fit-for-purpose to simulate extreme weather events, let alone to attribute them to human caused warming. 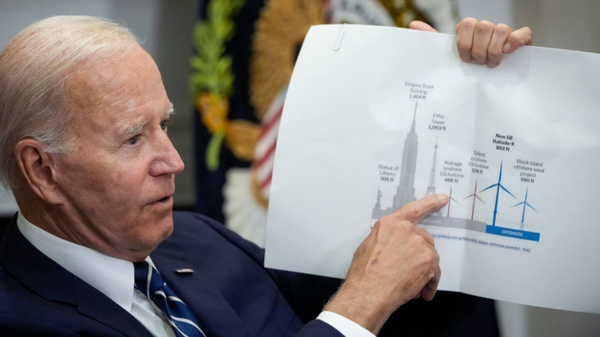 “Plans for massive offshore wind farms that President Joe Biden hopes will power as many as 10 million American homes by 2030 are starting to wobble,” reports Bloomberg. On October 31, the New Jersey utility Public Service Enterprise Group (PSEG), which owns 25 percent of the project, said it was considering pulling out of Ocean Wind 1, Bloomberg reports.

If constructed, Ocean Wind 1 will be the largest offshore wind facility off the coast of New Jersey. Its 98 12-megawatt turbines will be located 13 miles offshore from Atlantic City. As planned it would generate 1.1 gigawatts, enough for 500,000 homes.

On a call with investors, PSEG Chief Executive Ralph LaRossa said high costs and construction delays were forcing the company to reconsider its participation in the project. Majority shareholder Orsted Offshore North America admitted in July that inflation and supply chain problems were forcing changes to the company’s near-term offshore wind plans.

Avangrid has asked state regulators to pause their review of the contract for one month, to allow the company to reevaluate the timeline and cost estimates for the project, to which its lawyers said the company is still committed.

“A one-month suspension would give the parties an opportunity to evaluate the current situation facing the project and potentially agree upon changes to the PPAs … that could allow the project to return to viability,” they wrote. Translation: consumers will have to pay even more.

The problem with offshore wind is that it costs a lot in both capital and labor. High inflation and rising interest rates are hampering financing, and supply-chain problems are creating materials shortages and extending the timelines for construction and completion.

For the public, the problem with offshore wind is its intermittency and expense: it often cannot supply the promised power, and it is the highest-cost source of electricity. That means New Jersey and Massachusetts residents, whose power costs are already among the highest in the nation, will get hit with even-higher prices and greater likelihood of blackouts.

Oh, and by the way, there is no evidence whatsoever Ocean Wind 1, Commonwealth, or the numerous other politically motivated wind boondoggles will decrease climate change in the slightest. The best thing for consumers would be if all the Biden administration’s grand schemes for offshore wind power fail.

COP27 Begins Amid an Energy Crisis

It’s no secret that people across the globe are dealing with an energy shortage. The convenient excuse has been to blame Russia’s invasion of Ukraine, which is a factor, but this narrative doesn’t tell the whole story. For decades, politicians have passed anti-human policies to signal how “green” they are, and people are paying the price.

With the 2022 United Nations Climate Change Conference (COP27) just days away, the question turns to how global elites will explain the hardships regular people are suffering through. Their plans of controlling global temperatures through limiting carbon dioxide, a foolish plan outright, requires massive sacrifice in standards of living. With gas prices at all-time highs, supply chain woes, and energy rationing aplenty, are people truly willing to undergo more in the name of a nonexistent crisis?

In this episode of Climate Change Roundtable, Andy Singer, Anthony Watts, Linnea Lueken, and H. Sterling Burnett discuss the false information barrage being pushed my the corporate media in preparation of COP27.

BONUS Video of the Week: Corporate Totalitarianism Through Woke Investing

The Heartland Institute’s David Hoyt was recently a guest on Rob Schmitt Tonight on Newsmax TV to talk about his American Thinker piece titled “ESG and Corporate Totalitarianism.” 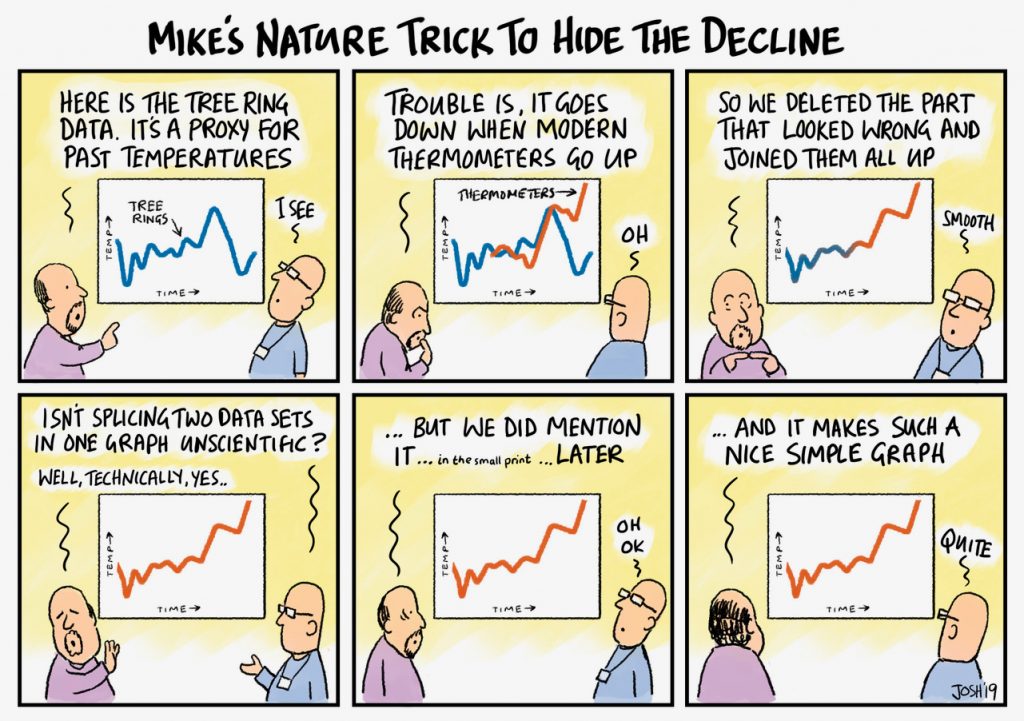 via Cartoons by Josh